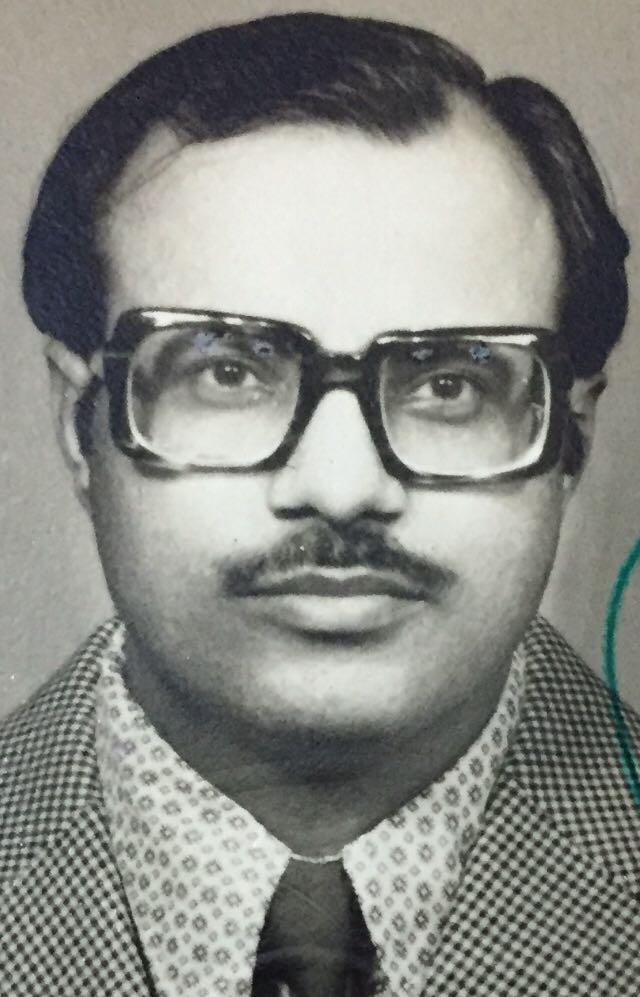 One of greatest Chemical Engineers of his time who as a leader left an indelible mark on Indian Chemical Industry, Dr VD Mehta, also known as ''Fibre Man of India'' was born on c. 11 October 1938 to Mr Tikan Mehta and Smt Radha Bai in Khanpur, Rahim Yar Khan district in erstwhile Bhawalpur State of undivided India  (now in Pakistan). He migrated to India after partition in 1947 at young age and settled along with his parents in Rajpura PEPSU Patilala district. He belonged to Bhawalpuri Hindu community. He started his education in Rajpura and Ambala. After completing Intermediate of Science, he decided to go to Bombay for higher studies much against the wishes of his father who had wanted him to work and contribute in the local shop that he had started to earn the livelihood.

He completed B. Chem Engg. in 1964 but did not take up any job in the industry immediately. Instead he continued his further studies joining MSc Tech in Chemical Technology at his alma mater UDCT. The legendry Prof MM Sharma had just returned back to UDCT as youngest professor after completing his PhD from Cambridge. VD Mehta was his first post-graduate student.

During his MSc course, he conducted experiments of chemical absorption and vaporisation to examine the effects of diffusivity (Koide,1996) and measured the true gas-side mass-transfer kG values experimentally by the chemical method (Charpentier,1981). This was a novel work hence based on this his first research paper Effect of diffusion on gas-side mass transfer coefficient was published in 1966 in an international journal Chemical Engineering Science. This research conducted by him at masters level has been cited by several scientists subsequently.

Soon after his master’s he took up a job in Nirlon Synthetic Fibres & Chemicals Ltd, Bombay. The synthetic fibre industry was taking its root in India then. While in the industry, he realised the importance of research hence he returned back to UDCT in 1968 to complete his PhD. It was uncommon those days to complete masters, go to industry and then come back to do PhD.

Prof MM Sharma remembers him as a highly talented hard-working researcher, a kind of introvert person who mostly limited himself to the laboratory. No wonder he finished his PhD in record two and half years. During his early PhD period, we come across his second research paper Mass transfer in plate columns co-authored with Sharma MM and Mashelkar RA. This was published in British Chemical Engineering in 1969. He submitted his doctoral thesis in 1970 (Mehta, V. D., Ph.D. Tech. Thesis, University of Bombay, India 1970) which has been cited in many papers later on. A scholarship awarded by the University Grants Commission had enabled him to carry out this work.

Based on his PhD theses, another paper Mass transfer in mechanical agitated gas-liquid contactors was published in 1971 in the journal Chemical Engineering Science. This paper seems to be a seminal work in chemical engineering and has been cited in hundreds of later research papers.

After completion of doctoral degree, Dr Mehta returned back to chemical industry, to his passion ‘’Synthetic Fibre’’. He dedicated his entire life to chemical industry dealing with Polyester staple fibre (PSF), fabrics, yarn etc. and rose to heights in terms of expertise and management hierarchy.

He worked with Sri Ram Fibres (SRF) Ltd.in Madras (now Chennai) till 1980. Mr IB Lal, a batchmate of Prof MM Sharma was his senior here. During his tenure with SRF, he was member of Industrial Textiles Sectional Committee and in this capacity he contributed in formulating standard for cotton liner fabrics IS: 9998 - 1981 Specification for Cotton Liner Fabrics.

In 1980 he moved to western India, the industrial growth Centre of India. He joined Baroda Rayon Corporation Limited (BRC) Surat and was General Manager (GM) till 1991. Prof Sharma recalled visiting his home and spending a night at his home in Udhana near Surat. During his tenure with BRC, he was member of Subcommittee for physical methods of Physical Methods of Test for Man-Made Fibre Textiles, TDC 1:20 and contributed in developing indian standard IS: 7703 (Part 5) -1987: Methods of Test for Continuous Filament Polyester and Polyamide Flat Yarn.

In 1991, he shifted to north India in Ghaziabad near Delhi as Senior Vice President with Swadeshi Polytex Ltd (SPL). He was also President of Ghaziabad Management Association during 1993-1994.

In 1994, he took over the role of CEO of Terene Fibre India Ltd (TFIL) formerly called Chemical and Fibres India Ltd (CAFI) in Ghansoli, New Mumbai. TFIL (formerly CAFI) was an ICI unit which merged with Reliance. Dr Mehta headed TFIL during this transition phase and turned around this Unit and brought much higher production before moving back to his native town Rajpura in Punjab to his parents.

Now, in 1996 he was back to Rajpura after 36 years of service to chemical industry of India as an expert on synthetic fibre. He did not come to retire but to give expression to the suppressed ‘’entrepreneur’’ in him. He set up a small PET bottle plant (first of its kind in that region) in Rajpura in 1996. Shree Nath Techno Products Private Limited (SNTPPL), Rajpura the company founded by Dr Mehta ran successfully (albeit at lower scale) till 2010 when he suffered cerebral stroke. After a brief illness, he left for his heavenly abode on 10 August 2010.